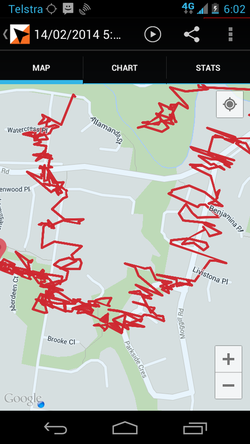 Assisted GPS (abbreviated generally as A-GPS) is a system that can in many cases greatly improve the startup performance or time-to-first-fix (TTFF) of a GPS satellite-based positioning system. It is used extensively with GPS-capable mobile phones, as its development was accelerated by the U.S. FCC's 911 requirement to make the location of a cell phone available to emergency call dispatchers. 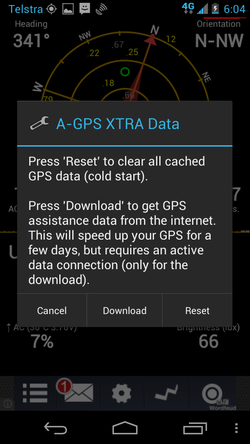 I had used my Android in New Zealand and then returned home to Brisbane (2,500km NW of where I had been in New Zealand). I had not allowed data roaming in NZ.

Upon my return, on a clear day, with good GPS reception, the track I recorded is shown in the above screen print!!

To remedy this, I used an app to re-download GPS assistance data and this corrected the issue immediately.

I used the "GPS Status & Toolbar" app from MobiWIA installed. This includes functions to manage the Assisted GPS functions. I found that if if I resetthe A-GPS nothing changed. But if I used "Download" the issue was fixed immediately.
Powered by